When we moved to our home in the Welsh countryside four years ago, we didn’t realise that we’d be inadvertently going into the bed and breakfast business. Not one that pays, of course, as from time to time we find that we have a lodger in the house that tucks in to whatever food he or she can find and then, presumably, finds a bed to sleep in. This happened last year. His name was Marvin. He didn’t exactly pay us for our services, but kindly left lots of tiny black packages for us in places where we could easily find them – such as in our bird food cupboard (ignoring the note saying “For Birds Only”), amongst the dusters in the cupboard under the sink (he clearly liked to do a bit of housework for us) or, more openly, on our kitchen work surfaces.

As a thank you, we invited him into a small room with a little trap door. Just to make him welcome, we placed a piece of chocolate inside. Contrary to popular belief, his kind prefers chocolate to cheese. Peanut butter is meant to be their favourite, but we didn’t have any at the time. If the trap door did close on him after he helped himself to his treat, he cleverly found a way to reopen it without leaving a trace of chocolate behind. We reluctantly took the more violent route, using a traditional mousetrap. He seemed to be ignoring this, showing no signs of any activity, until a week or so later there was a kind of smell. It worsened as the days went by. It transpired that he had expired about 18 inches (45 centimetres in old money) away from the aforementioned execution device, in a very dark corner under the kitchen sink, having invited all the local maggots along to party with.

That was Marvin. Our new bed and breakfast customer is called Mervyn. If he has a middle name it is Stealth. He made his way into one of Sarah’s dancing bags in a spare room upstairs. Inside this, along with a pair of her dancing shoes and a water bottle, were two snacks – a peanut butter cereal-type bar (for me) and a blackcurrant-flavoured fruit bar (for Sarah), unopened in their wrappers. He had gnawed through Sarah’s fruit bar wrapper and ate about three-quarters of its contents, leaving my peanut butter bar alone. In her bag we found just one tiny black package and no more. On further inspection, he had left numerous of these under the wardrobe. He clearly has very good bowel control and knows exactly how to hide the evidence when he needs to excrete.

A week or so had passed with no further activity. Maybe he’d just been passing through. However, yesterday, in the front door porch, he made his way into another of Sarah’s dancing bags and located another of the same fruit bars, but leaving an apple and pear bar untouched. He either has a very keen sense of smell or he is a good reader. Last night, before bed, I left him a treat for supper. We like to offer the “evening meal” option in our bed and breakfast services. He nonchalantly took the piece of his favourite fruit bar from the spring-loaded execution device that had clearly scared Marvin to death a year ago and went off on his way, displaying spotless bowel control throughout.

We have since found a small hole in the blocked-out chimney breast in our dining room from which a pipe emerges. It was only a few weeks ago that we dismissed a fluttering noise from this area as probably being a bird that may have entered it. We now have a different opinion on this. It is the most likely point of entry for Mervyn. Sarah has just blocked the hole with some filler. We have also since found a more humane glue trap that we bought last year but didn’t need to use. It is like a sheet of sticky paper that, once he walks onto it, will make him unable to escape – apparently.

We’ll have to wait and see now.

Please visit our website http://www.markdpritchard.com where you can find details about our book I’M NEVER ILL (A journey through brain surgery and beyond…), which tells our remarkable story of triumph over a brain haemorrhage (me) and breast cancer (Sarah).

There are direct links to purchase if from the website. The paperback is £7.99 (UK) and the e-book is only £1.99. They are available worldwide in all major currencies from Amazon. If you live in the UK, I can deliver free of charge.

Today, Sarah had an appointment at Velindre Hospital, Cardiff. Nobody wishes this kind of thing on anyone, as it is our local cancer-dedicated hospital. This, however, was nothing related to bad news. She took part in a trial during her radiotherapy following her treatment for breast cancer three years ago, where they gave one group of people the normal daily amount of radiation five days a week over a three-week period, while another group had fewer, but more intensive doses (if that’s the correct word) over a period of just one week. Each year, despite having been discharged from hospital about a year ago, she is invited to attend to allow staff to make checks and compare the progress with the other patients in the trial. For the record, Sarah was not in the latter group, but was given the usual dose over the three-week period.

Each time she goes, they are amazed at her progress. “When did you last have a cold?” is one of their regular questions. “I can’t remember,” she replied. That doesn’t mean that the chemotherapy had affect her memory, of course – heaven forbid that it had with my track record. Chemotherapy tends to have a detrimental effect on the immune system for some time afterwards. She joked only recently, “I’m concerned that I haven’t had a cold in ages. Maybe I should see a doctor!” She has, in the past, been particularly vulnerable to colds as she works in a primary school with small children. She was told that most people who come to see them after what she has been through are packed off with thousands of pounds worth of drugs and referrals for other treatments for this, that and the other. My wife, The Legend (as she has been referred to before now), is the complete picture of health. Not only does she live a very active and illness-free lifestyle, but she has managed to reverse the lymphoedema that she had a couple of years ago as a result of her lymph nodes being removed from under her left arm. It was 8.5% bigger than her right arm at the initial diagnosis, but she managed to get it down to 6% smaller than her right arm after about a year. To the lay person, this may not seem to be anything special. But to a medically-trained person it seems to be a jaw-dropping feat.

Sarah just after chemotherapy, and a year later.

Sarah has REALLY looked after herself since her cancer. She has completely altered her diet, cutting out sugar and carbohydrates as much as possible, eating mostly unprocessed food, she barely drinks alcohol and we’ve both taken up 1950s-style swing dance and lindy hop. She has lost three stone in weight and looks a completely different person. At Velindre, they call her inspirational, her progress and attitude being an example to others. “You should give motivational talks,” they tell her. Yes, I think she should. There is so much to learn from people who approach and tackle illnesses in such a positive way as a victor, rather than shrink away and become a self-induced victim. It is always difficult to know which factors have been the greatest contributors to her ongoing good health. We believe that her diet has played a big part in her immunity to illnesses, and our dancing (which includes lots of arm movements) to have played a significant role in reversing her lymphoedema. We will never know exactly.

People need to know this. We can’t just keep it to ourselves. It would be wrong to not share what we’ve learned. We are not medical people, but we know what we have done and what has happened. Others, now, can have the opportunity to make up their own minds.

Please visit our website http://www.markdpritchard.com as I have written a book entitled I’M NEVER ILL (A journey through brain surgery and beyond..). 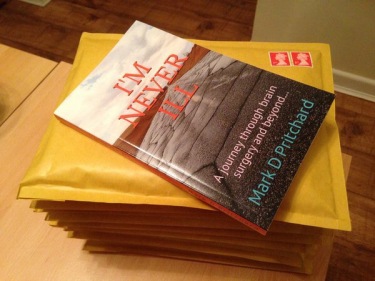 It was initially written about how Sarah nursed me through my brain haemorrhage in 2009, but she was diagnosed with breast cancer while I was in the process of writing it. Some of her journey, too, is documented in the book. It has been used as lecture material and reading material for student nurses throughout the UK because of the patient perspective, but has been enjoyed by people from all walks of life, achieving mostly 5* ratings and reviews on Amazon. 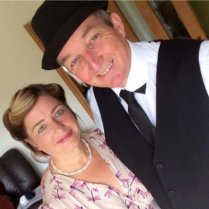 Best wishes from Mark and Sarah.